Towards the WB Summit in Poznan: Meeting of the WB6 MFAs and the CSF WB 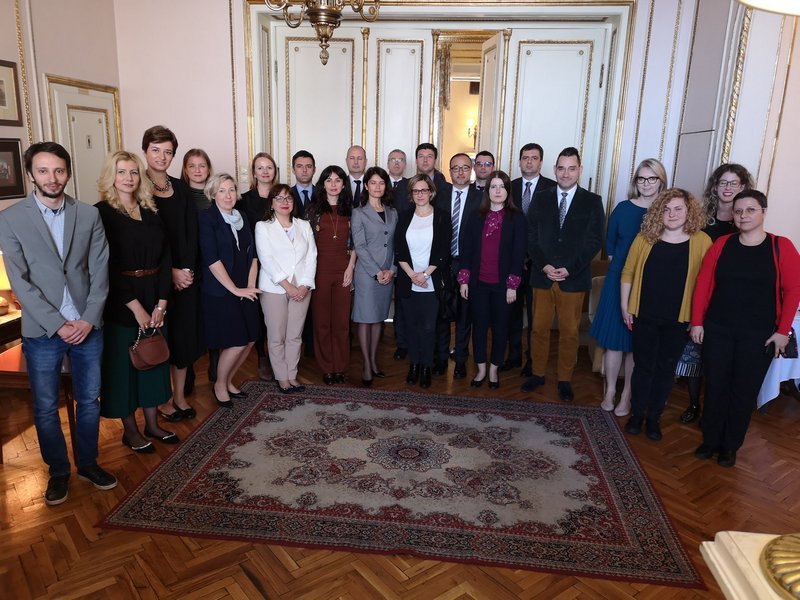 A regional meeting of the representatives of the WB6 Ministries of Foreign Affairs and the Civil Society Forum of the Western Balkans (CSF WB) took place in Belgrade on 10th of May, 2019. This meeting was an opportunity for regional experts and officials to discuss modalities for improving civil society participation in decision-making process in the Western Balkans, as well as for the exchange of ideas on how to better address regionally-relevant challenges by achieving greater synergy of civil society and public institutions.

In addition to economy, connectivity and security, civil society has been recognized as one of the priority areas of the 2019 Western Balkans Summit in Poznan. Within the preparatory process, the hosts of the Summit met with a number of civil society actors and officials throughout the region. The Belgrade meeting participants were welcomed by Mr. Dejan Ralevic, Deputy Assistant Minister for EU, Ministry of Foreign Affairs of Serbia, Ms. Beata Jaczewska, Coordinator of the business and civil society forums at the WB Summit in Poznan, Mr. Igor Bandovic, Senior Program Manager, European Fund for the Balkans, Ms. Dorothea Gieselmann, Deputy Head of Mission, German Embassy in Belgrade, and Mr. Filip Radunovic, Sector Fund Manager, GIZ ORF “Promotion of EU Integration”.

The first session of the meeting was dedicated to the exchange upon the six policy briefs that the CSF WB is preparing on the topics related to the priorities of the WB Summit in Poznan, namely:

Additionally, plans for the civil society forum at the WB Summit in Poznan were presented by the representatives of the Ministry of Foreign Affairs of Poland and the Centre for Eastern Studies.

In the second part, the meeting participants discussed regarding the needs and possibilities for further strengthening cooperation between the CSF WB and the WB6 MFAs, as well as between civil and public sectors in general. It was concluded that this format of exchange might be particularly beneficial taking into account great expertise existing in civil sector within various topics relevant for the EU accession process.

The meeting was jointly organized by the Ministry of Foreign Affairs of Serbia, GIZ ORF “Promotion of EU Integration” and the European Fund for the Balkans.